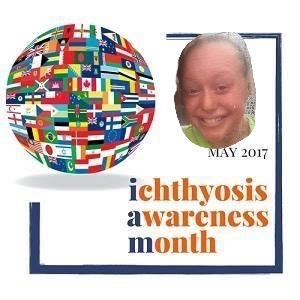 As May rolls around each year I question what I can do different this year from last to raise awareness about Icthyosis, the genetic skin disease my daughter was born with.  It has, over the more recent years, become important to me to help raise awareness as my love/hate relationship with Ichthyosis has become more about love and less about hate.

In the early years of Ashlynne's life, I couldn't have cared less about raising awareness.  All I wanted was for these doctors to get on the ball and find a cure for my kid, and the other children and adults that were affected by this disease.  But as I have found an inner peace with our situation, I have realized that by raising awareness about Ichthyosis, I am not only educating people on our particular situation, but hopefully spreading awareness about compassion in general.  Ichthyosis is by far not the only disease that carries with it a visual difference.  There is the more common ones, such as cleft pallets, and Down Syndrome.  But there are also the more uncommon ones such as Progeria, and Trisomy 18.  And while some are more well known than others, and are all very different diseases, they all carry something in common:  They all present with visual physical differences.  And MOST of the kids and adults affected with these various diseases know they are different.  And they know you're staring.  And it stings.

I know most people don't mean to be rude.  They don't mean to stare.  If it's something you've never seen, it's a natural reaction to do a double take.  You're curious.  Maybe you want to get educated.  Maybe you want to go home, and google and try to figure out why the little girl in the mall had such red, dry skin.  It looked like a burn, but maybe it wasn't?   Maybe you have the best of intentions.  I think most people do.  Most people's hearts go out to those with differences.  We, as adults, know what a tough world this is, and we hate this for these kiddos.  But the kiddos getting the stares don't know that.   They just know that yet another person looked a little too long, or stopped in their tracks, or whispered to their friends, and tried not to make it obvious they were talking about them.  They just know that yet another person noticed they were different than the other kids on the playground.  They just became a little more self conscious.  They just pulled into their shell a little more.

So how long is too long to look?  I guess I don't have the magic answer for that.  If my kid wasn't "different" I don't know that I would even think about these scenarios.  But I do know there are gentle ways to handle it if you do notice a kiddo with a difference.  Smile.  Don't rush your child away if they become curious.  It's ok to ask.  You're children are learning from you how to handle diversity in people.  Be the person you want them to grow to be.  Don't just stand there with your jaw on the ground.  Don't stop dead in your tracks.  Don't point.  Don't whisper.  They can see you.  Their parents can see you.  Their siblings, and friends, can see you.  And we all know our loved one is different.  So just smile.  Say hi.  Ask.  Get educated.

Email ThisBlogThis!Share to TwitterShare to FacebookShare to Pinterest
Labels: Ichthyosis