ALS: Are you aware?

As many of you know, May is Ichthyosis Awareness Month.  Every year I flood people's time lines with info about Ichthyosis, and pictures, and facts.  I do my best to help educate.  This has been a cause close to my heart for 12 years now, my soap box if you will.  But nearly five years ago, another disease struck close to home and it shares its awareness month with Ichthyosis. This disease is ALS, commonly known as Lou Gehrig's Disease.  I don't know much about the physiology of it, and what exactly it does to attack the body.  All I know is how it affected a man that I cared very much about, and how it devastated my best friend's family. 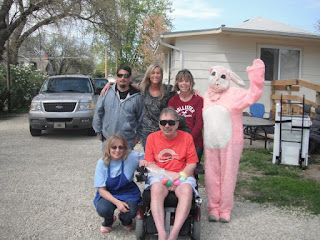 David was a great man.  Growing up, Alexis's house had a revolving door for all of us loud, obnoxious girls.  With her mom and sister coaching our softball team, we were constantly running in and out before and after games and practices.  We would take over their entire house for a sleepover, and were never turned away, regardless of what else was going on in their life.  David had 2 boys of his own, and all of a sudden, he had about 10 of us girls thrown at him.  Never once did I see him lose his patience with us.  I remember his sitting in his recliner, in his work clothes, laughing as we would run through the house with our shenanigans.  He never told us to quiet down, go home, or go outside.  He took it all in stride.  He even started helping coach our softball team.  He did however stop coaching first base when I put him on his butt with a foul ball.... 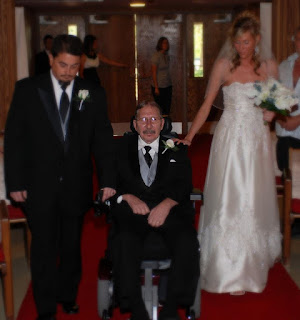 About five years ago, some weakness started in his legs, and he thought it was his back acting up again.  After several trips to the chiropractor, and a couple of falls, he made a doctor's appointment.  I remember before his appointment, his daughter, Sara telling me that they thought they had it narrowed down to 2 things, and they were hoping for M.S.  At their appointment, they got the news they didn't want to hear.  It was ALS, Amyotrophic Lateral Sclerosis.  A death sentence.  And he was at his grandson's t-ball game that night.  That was in June.  He was at every ball game that summer.  He was at the fair, and by the time the demo derby rolled around, which is a big deal to his family, he was using a walker.  I had done some research on it so I wasn't completely clueless as to what was going to happen, and I was in shock that it seemed to be happening so fast... and still in shock that it was happening to them.

He passed away the following June, after ALS ravaged his body.  He was able to give Alexis away at her wedding, and he and his wife, Linda, had a dance, all done from his wheelchair.  These wedding photos would be the last family photos they would all have together.  He left many, many people behind who loved him, and who were devastated to see this happen to him, and all of those who loved him.  It was a terrible disease.  And for me, it was a terrible year, watching it destroy these people that I love and have considered family for so long.  I watched it take an emotional, physical, and mental toll on not only David, but the entire family.

This past summer, something went viral that many of you may have heard of, or even participated in.  It seemed that everyone was talking about it, and strategically planning who they were going to nominate to do it next.  The "Ice Bucket Challenge" swept the nation, and the purpose was to raise awareness, and money for ALS.  It raised millions of dollars, and raised A LOT of attention for a disease that is rarely in the news.  A lot of people admitted to participating, but not knowing what it was necessarily for.  And because of this, it received some back lash. Well I just want you to know, that David, and the others robbed of their daily functions and lives, is who it was for.  We did it for all of those families out there who are currently watching it destroy one of their loved ones, hoping and praying that there is a cure before their "David" take his last breath.  And someday, with all of the people devoting their lives to research, there will be a cure.  There has to be, because too many people believe in this cause.  Some of the greatest people I know hold this cause very close to their heart.  And they have a reason to.  They personally watched its affects on a person they loved very much.  A person that can never be replaced, but will continue to impact their lives with the love he showed, and the legacy he left for them.  ALS, took his body, and his physical presence, but it can never erase the memory we all have of his smile.