We are a very busy family, and it seems we are always adding things to our plate.  I'm always all for the kids trying new activities, as exhausting as it may be.  For some time now, my son has been racing 4 wheelers with his friends, and has gone to the sand dunes on 4 wheeler trips, but today, he raced in his first official race.  He finished last.  And I'm glad.

Why am I glad?  Because look at that phrase "he finished last", and focus on that second word... "finished". He finished.

Let me backtrack.  He and my husband got up and left before the rest of us.  I was running late, because I was searching for the bag chairs that our garage seems to have eaten.  I was rushing to get there by 10:30, the start time.  He was the 3rd race, so I had some leeway if I was a little late (which I chronically tend to be).  By 10:30 I got the phone call from my husband that I missed his first heat.  My heart instantly sank, I so badly wanted to be there on time to cheer him on.  Then, he proceeds to tell me that Gavin popped a wheelie, rode it out for about 5 feet, then flipped over backwards, he was ok, but complaining about his back.  The medics checked him out and told him that he would be a little sore, but would be ok.  I was then slightly relieved that I missed it, knowing my mom-stincts would kick in and I probably would have panicked had I seen it.

When I got there, he was laying next to the truck with ice on his back, saying he wasn't going back out on the track.  There might have been a certain amount of drama involved in this, but it is hell knowing that your child is in pain, and you can't fix it.  The protective side of me wanted to say ok, and pack his stuff up.  But then I got myself in check.  I swallowed that fear of him getting hurt, and told him he was getting back on that quad, because we aren't quitters.  He was SO MAD.  He said fine, he would run in his next heat, but that this weekend was going to be his first and last race.  From now on, he just wants to ride for fun, and this wasn't fun.  His attitude continued to decline as he realized I wasn't backing down, and he was going to compete in his 2nd race. 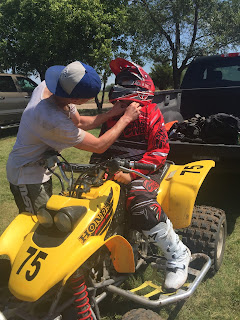 In all of the time that he has ridden 4 wheelers, he had never had a wreck.  We knew at some point in time it would come, and with the more confidence he gained in riding, and the faster he went, the worse the wreck would be.  I consider myself and him lucky that he hadn't gotten up to speed.  I'm glad he got that first wreck under his belt, and I'm also glad I wasn't there to witness it! But I know how easily he scares, and I knew this wreck was going to scare him from keeping on with something he loved.  If I let it.  And I wasn't going to let him quit.  Not until he at least knew what it felt like to cross that finish line.  If he still felt like it wasn't for him, we didn't have to do it again, but he was going to cross that line.

When the time to suit up came, he was so uncooperative, that my husband practically had to get him dressed in his chest protector, boots, and helmet, all the while, reminding me he wouldn't be doing this again.  He got on the quad, and rode to the gates, with words of encouragement from both of us. Just finish the race, buddy.  I reminded him he didn't have to come in first, just get to that checkered flag.  As he was lining up, I could see the nerves and fear in his eyes, and tried not to let him see it in mine.  The gates went down, everyone took off, and there he sat.  He killed the engine.  He got it started, went a few feet, killed it again.  I knew what he was doing, he was scared to give it too much gas and flip it over again.  Third time was a charm, and he took off.  Very slowly.  But he took off.  He rode around the first jump, rode over the next one very slowly, and started to pick up speed a little speed the further he rode.  By the fourth, and final lap, he was starting to actually jump some of the jumps and finally got all 4 wheels off the ground.  And he came in dead last.  By a long shot.

And I have never been more proud of him.

You see, he was terrified to get back out on that track.  But he did.  And he did it with a huge smile on his face.  He was as proud of himself as I was of him.  He pushed through, and did something that scared him, and he didn't walk away from it because it felt uncomfortable.  And once he crossed that finish line, he proved to himself that he could do something that he thought he couldn't.  I chose not to look at it like he "lost the race".  He may not have come in first, he came in last, but he didn't lose, it was a win for him to get through it.  Not giving up paid off for him.  Huge life lesson learned.  And a pretty proud mom moment for me.  It was his first time out.  And because it was his first time out, I knew that if he didn't get out there again, he never would.  And he did it.  HE DID IT!  Coming in last was nothing to be ashamed of.

There was no trophy, and there was no participation metal or ribbon, but there was this:  Other riders in his heat came up and congratulated him on finishing his first race, and assured him that he did great for his first time out and for his age (he was racing against 14-16 year olds), and made sure that he was ok after his spill in the first heat.  Over and over again, he kept hearing, "But you got back out there and finished, and that's what matters", and "Good job, man!"  I think that made him feel much better, and less embarrassed about how he started out, and definitely eased the nerves about future races when he saw how nice and welcoming this racing community is.  That sense of pride, and accomplishment is better than any medal he could have gotten just for showing up.  Oh, and miraculously, his back felt so much better after his 2nd race, and he thinks he might give it another shot at the next race in two weeks.