The impact of one word

Well, coming up on Ashlynne's 12th birthday I am doing that thing I do every year, reflecting.  Reflecting on how much I, as a mom and as a person, have changed since she made me a mommy.

Have you ever stopped and thought about the impact that learning one new word can have on your life? Most words come and go in our lives rather casually.  Most new words are learned without really giving it a second thought.  Or other words that can have a huge impact on our life, such as cancer, or heart disease, diabetes, are words that are so commonly spoken, that we can't pin point when it was that they were actually learned or first spoken to us.  But on January 14, 2003, I learned a new word that would change the course of my life forever: Ichthyosis.

Ashlynne was a matter of minutes old before her doctor figured out what was wrong with her at birth.  And after phone calls were made confirming it, I heard this word for the first time in my life.  I didn't know right then the impact it would have on the rest of my life.  Oh how I began to hate that word!  I couldn't force myself to say it some days.  The anger that would rise up in me when I had to explain her diagnosis to all of the people in my life who had never heard this word was immeasurable.  I was so ANGRY!  I HATED Ichthyosis and everything associated with it.  I hated the doctors appointments, and the physical therapy appointments, and the lotioning, and the long baths, and the fact that my baby was in pain every minute of every day!  I hated that I had to explain that no, she isn't burned, no, she doesn't have milk on her face, that's lotion, no, she isn't dirty, in fact she's had 2 baths today.  I hated that she didn't walk until she was 2 1/2.  I hated that I didn't feel like I could go out in public with her without people making comments.  I hated all the well intentioned advice I got about trying shea butter, or some other concoction of lotions someone's aunt's neighbor had once tried.  For a time, I even hated God.  Why would he let my innocent, perfect baby go through all of this hell?!  She didn't deserve this! 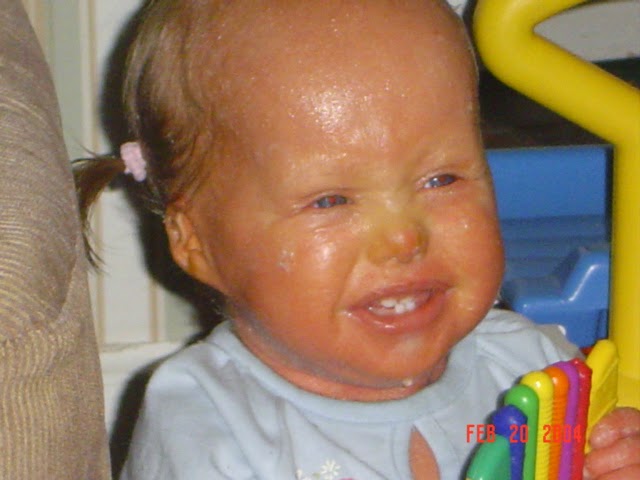 
Life gave me a huge slap in the face the first time I heard that word that at first was my biggest nemesis.  From the second that word was spoken, my whole world was turned upside down.  But as I became more involved with other families, my world began to right itself.  I started to realize that I could draw off of the strength of some of these amazing mothers that had raised very successful kids that didn't feel sorry for themselves.  Some of them had it way worse than Ashlynne and I, so what right did I have sitting around crying over what could have been? I needed to change my perspective.  I needed to start being thankful that things weren't as bad as they could have been.  "Could have been" could have been much worse than it was!  When I stopped and really looked, I had a huge blessing on my hands.  All of those appointments, they gave me time with her where my attention wasn't divided.  All of those baths, those were play time, and one on one time.  And there was a protectiveness, and a bond there with my little girl that no one could touch.  She looked to me to apply that lotion, that made her feel better.  I got to carry her around longer, when other kids were running around and didn't want to be carried by mommy anymore.  And the physical therapy, most of that she just looked at as play time!  This was MY girl!  And you know what?  She was awesome!  Even as a baby, I could recognize that she was a fighter.  Her will was strong, her sense of humor intact, and I had never seen a more beautiful, perfect child.  I started to smile when I saw the skin flakes on the couch, rather than be embarrassed that someone else would find it dirty.  I wore those Aquaphor and Vaseline smears on my clothes like a badge of honor.  Honor.  I was HONORED to be her mommy. 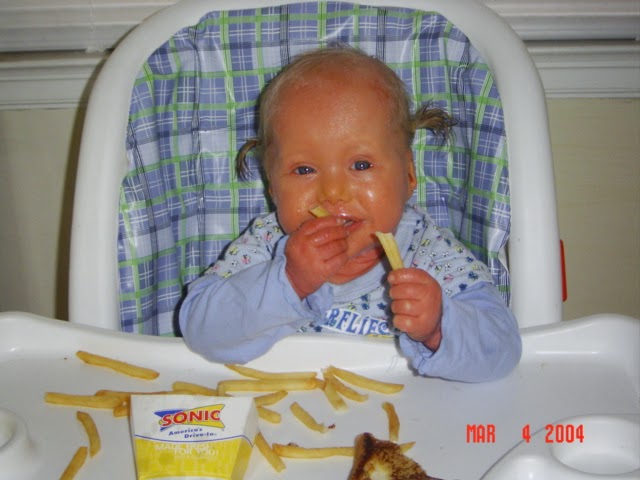 My anger dissolved, and rather than resent Him, I began to thank God every day that he trusted me with this little blessing.  I have always believed that God only gives you what you can handle.  And he doesn't always give you what you want, but more importantly, what you need.  And I am most certain that God realized that I needed Ashlynne as much as she needed me.  She has kept me grounded.  When times in my life were crazy, such as going through a divorce, or other major changes, her Ichthyosis forced me to focus.  I didn't have the choice to slack off, I had too much to do.  Being Ashlynne's mommy carried me through some of the hardest times of my life.  And I can only hope, the I can carry her through the hard times that are sure to strike her some day as well.  Not only did I draw off of the strength of the other amazing families I met through FIRST, but I also began to draw off of her strength.  If I gave up, or fell short, so might she.  And that is something I wouldn't be ok with.  For just as I imagined before she was born and the word "Ichthyosis" changed my world, I knew she was destined for great things.  This was one thing that Ichthyosis didn't change for me.  My girl was going to be an amazing force in this world.

Ichthyosis changed my world, but change can be good.