Momma's little get away

Well, Tuesday was back to reality for me after almost 2 weeks of fun for us.  And I'm having kind of a hard time getting back into the swing of things!
I picked up Jordan from the airport on Thursday May 2, and she stayed with us for a week.  During that week we held "Ichthyosis Day at the K", which was awesome and successful!!! *two thumbs up*, we shopped, ate, hung out, shared a lot of laughs, and made a lot of memories.  It was great having her here with us for a whole week. We got very spoiled. I keep trying to convince her to move to KS, we will see if my power of persuasion works :).
When it was time for Jordan to leave the following Thursday, we all hopped a plane and flew into Charlotte, NC together, where my friend Alexis would be picking us up to spend a few days with her.  After lunch together, where we got to meet Jordan's husband Chris, and a few tears, we said goodbye to Jordan until next June, when we will be seeing her at the 2014 FIRST Conference in Indianapolis.  Jordan and Chris drove home to Columbia, SC and we headed north to Winston-Salem.
We started off with some shopping, which for any of you that know Lex, this was a concession for her. She doesn't have the shopaholic gene that I do. But she was very patient with me, especially in the Coach store ;).  My favorite part about vacationing with Lex is that I actually get a chance to relax. Sleeping in for me is anything past 7 am, and I got to do this everyday!! We got massages on Friday while Russ stayed at her house and puppy-sat, then we headed down to Darlington, SC to the Nationwide NASCAR race.   This is 2 races I have been to this year, so I would call this progress. I am learning to embrace Russ's inner NASCAR fan.  We were down in the pits for the race, and seeing the inner workings of all of it was, I must admit, actually pretty cool.  It made Russ's day to be down there, he loves that stuff!  Saturday we went and had lunch at the Childress Winery, and I proceeded to polish off a few peach bellinis, which has become a tradition for Lex and I.  We went back to the house and continued the festivities with a get together with several of Danny & Alexis's friends.  While the guys watched the race, all of us girls played a card game called Anomia (if you haven't heard of this game, go check it out... FUN!!).  It was nice to meet Lex's NC friends and be able to put faces with the names. Some of her friends I already felt like I knew! 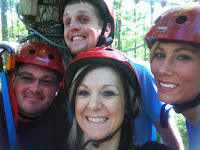 Sunday brought a day of some serious sleeping in, and probably my favorite part of the trip, ZIP LINING!!! This is something I have wanted to try for a long time now, the DIY one from childhood put the taste in my mouth, but that one ended with a neighbor kid's arm broken. We had about 2 hours of zip lining through the trees, and had a lot of laughs throughout the day. Our guides were funny, and pretty good sports considering some of the comments that were made from our little group!  (Danny and I have a knack at being inappropriate) The harnesses were less than comfortable, and way less than flattering (more awkward for the guys if you catch my drift) but it definitely made for some good laughs.

We flew home Monday.  It's always bittersweet.  I miss my kids when I've been gone, but its very hard leaving Lex.  I have known her since 1st grade, and that is such a valuable bond.  There's times it is so lonely knowing that she is that far away.  It really makes me cherish the friendship I am able to maintain with her. I am so glad that all of the miles between us has not caused us to skip a single beat.
We got home at about 1:30 Tuesday morning, and after just a few hours of sleep, Russ was right back at it and headed to work.  I went to my mom's to get the kids, and was greeted with some of the sweetest hugs and kisses a girl could ask for.  Ashlynne was glad to see me, but still wanted to stay with grandma, of course, but Gavin and Breckyn wouldn't let me out of their sight.  I like to think they missed me as much as I missed them.  Later that morning, I discovered that my closet rod had broken and dumped all of my clothes onto the floor, and one of our hamsters died while we were gone... It's back to reality I guess!!
at May 16, 2013