When National headlines hit close to home, and affect one of your best friends...

I spent most of this week mad.  Like, really pissed off if I'm being honest.  I went from crying, to fuming mad, to tossing and turning and losing sleep.  Now, I'm on the empowered step that my anger generally reaches.  Here's the story:

An event that made national headlines, and hit news networks all over the nation hit a little too close to home for my comfort.  My dear friend Jordan, and her son Jackson, were kicked off of an American Airlines flight because of their ichthyosis. Yes, MY Jordan, and yes, the disease that Ashlynne has, that brought Jordan into my life, caused her to be discriminated against in a humiliating manner.  No, let me rephrase that... the disease didn't cause it, ignorance did.

When I saw the post online, my jaw dropped.  There's no way, someone saw my beautiful friend, and decided because of her physical appearance that she was not allowed to fly.  I was terrified, and sad for her.  As soon as she text me that they made it safely to the hotel, the terrified dissipated, and the intense anger set in. I will set it up for you:

Jordan and her son Jackson were headed home to Columbia, SC from El Paso, TX from spending the long weekend with her husband before he deployed for the Army.  They boarded their American Airlines flight, emotional from just leaving Chris, when an agent from the terminal boarded the plane and asked the people next to her to get up so he could talk to her.  He then asked her about her and Jackson's "rash".  She explained to him it is a genetic condition called Ichthyosis, and it is in no way contagious.  The agent seemed satisfied, and reported back to the crew, and Jordan was ultimately asked to leave the flight.  Here is the story in her words: 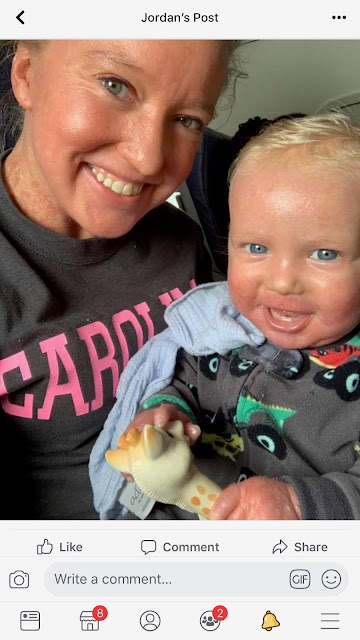 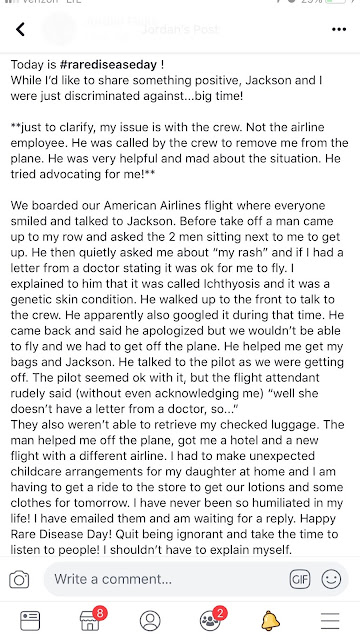 The airline did reach out to Jordan, after her post was made public and shared thousands of times over multiple social media outlets.  They have been offered different settlements, but that is not the point here.  The point, is that this never should have happened.  We allow people who are unvaccinated to fly, we allow people who travel from other countries that have had communicable disease outbreaks to fly, but we insist a mother and son with a genetic mutation have a doctor's note before they can go home after an emotionally exhausting goodbye.  That is shameful.  And the fact that her husband Chris, had to leave to fight for this country, worrying and wondering if his son and wife were able to make it home should make all of us sick to our stomachs.  He was fighting for everyone of us, while his wife was fighting to simply be able to board a plane.

Ashlynne and I have flown multiple times.  In fact, Jordan has flown out here to Kansas to visit us.  And NEVER have we been told we needed a doctor's note to board the plane.  In fact, when we fly United and Delta, we have always been accommodated, and treated very well.  The flight attendants and flight crew always went out of their way to make sure Ashlynne had anything she needed, and was very comfortable.  This was a case of a woman, not knowing what she was dealing with, and acting out of fear; fear of the different.  And it is beyond sad that in 2019 this is even an issue.

I thank God that Jackson was too young to understand what was going on, and that Sadie, Jordan's 4 year old, was not with them.  I also thank God that this happened to Jordan at the time it did.  The Jordan I met 8 years ago wouldn't have spoken up.  She would have went quietly into the night, and probably only told a select few people that this even happened to her.  However, the Jordan I know today, is a mother, who is not only fighting for herself, but for her son.  The Jordan I know now has a voice, and she is using it.  I am so proud of her.  I am proud of her for being classy, and speaking gracefully in a situation where I wouldn't have been so kind.  What if this would have happened to Ashlynne and I?  What would that have done to my 16 year old daughter's spirit?  Would she ever be brave enough to travel again?  Would it cause her to have more doubt in humanity?

Ashlynne has had to deal with stares her whole, life, and dealt with bullying by exclusion.  She has heard the whispers, and noticed that she didn't get invited to birthday parties, or other social events.  But we have never had to deal with anything on this level.  Honestly, I don't know how I would even begin to handle this.  I know I would like to say I would handle it with the dignity and grace that Jordan has, but we all know me here, I doubt that would have happened.

I have had to stop reading the comments on all of the articles, and shared posts.  People are down right cruel some times.  I even had one person tell me I need to stop breeding, since my daughter has ichthyosis.  But, we have also had those people share similar experiences, and offer words of comfort, and encouraging words about Jordan and Jackson's beauty.  My ultimate hope out of this, is that the airlines take pause, and evaluate procedures.  There should have been no reason Jordan wasn't allowed to fly on that air plane.  But if that airline had questions, why was her luggage checked, and why was she allowed to board, before anyone took note, and humiliated her in front of an entire airplane full of people?  People have said that the airline employee was just doing his job, and don't get me wrong, she has said he was very kind, but he wasn't doing his job.  He was doing what he was TOLD, but he wasn't doing his job.  His job was not to follow someone's act of discrimination.  Agree with me or not, that's what this was.  A gross discrimination. We have got to start standing up for ourselves if we want to avoid anything like this in the future.  Things like this should not be happening.  This wouldn't be tolerated if this would have been a family affected with any other genetic disease that is more well known, such as down syndrome, or another skin disorder such as Albinism. So it won't be tolerated this time.  I don't know exactly how Jordan will handle things, that is not for me to dictate.  I do know, however, that I will continue to share, and discuss how wrong this was, and how policies need to change.  I will not go down quietly about this.  Something needs to change.  And the only way that will happen is if we use our voices.  This isn't about Jordan throwing a fit, or anyone trying to get their 15 minutes of fame, as people have accused. It's about right and wrong, and simple human decency.

As for what Jordan wants, many of you may be curious.  When I asked her that question she said "I just want people to take the time to listen, or to put a new protocol/policy in place to prevent further misunderstandings.  And I want people to change the way they look at people who may not look like them, whether it's skin color, gender, orientation, nationality, or disability.  We are all humans who want to feel accepted no matter where we go."

I couldn't have said it better myself.  Thank you Jordan, for using your voice.  You are one of the bravest people I know.  I'm honored to call you my "Seester".


OH! And did I mention the irony of this happening on National Rare Disease Day?  Yup folks, that's right February 28, every year, is Rare Disease Day.  Jordan definitely got her chance to speak out and raise awareness this year in a very unique way, courtesy of American Airlines.

Email ThisBlogThis!Share to TwitterShare to FacebookShare to Pinterest
Labels: Ichthyosis