What I learned as a coach this summer

I love and adore my kids.  I love and adore my friends' kids.  But I can totally cop to my weak points, and patience isn't one of my strong virtues.  At most events that are swarming with kids, you can find me kind of fading off into the corner, trying to keep my anxiety at bay.  And let's be honest, I know that Breckyn and I butt heads more than the average mom/daughter combo.

So when I got asked to help coach the Abilene Attack 8 and Under softball league and traveling team that Breckyn would be playing on this summer, I really didn't know how well I was going to do, or even how much I would like it. Was playing in a weekend long coach pitch tournament going to be like watching paint dry?  By the end of the season, was I going to want to run away?  Or after each practice or game, was I going to be running for my car as fast as I could in search of the nearest bottle of wine?  Was I going to be able to coach Breckyn without absolutely terrifying the other girls, or catching a battery charge?  But, softball is in my blood.  I have been on that field since I was four years old, and  if I was going to give coaching a try, I guess this summer was as good a time as any to find out if it would be a good fit for me.  But before I knew it, these 10 little boogers wormed their way into my heart, and I fell in love with them all.

They showed me that kids, really just want to see each other succeed.  There were no cliques out on that field.  It didn't matter who was in who's class, or who had a nicer house, or who had nicer clothes, or whether or not they had played on the same team before.  When those 10 girls were on the field together, they were one team.  They were cheering each other on.  Celebrating each other's successes together, and encouraging each other when a goal wasn't reached.  They didn't hold grudges against a team mate for striking out, or not getting an out.  Instead, they helped them work on how to get it the next time.  Some of the more experienced girls would pair up with the younger ones, like Breckyn, to play catch.  In fact, we had a girl who had never played softball before a day in her life, and she was accepted just like the others who had played for several years.  It didn't matter skill level, or years of experiece, they just wanted to play catch with their friends.

They pushed each other.  They knew what their team mates were capable of, and they pushed them to do their best.  Not one single time did I hear one of those girls begrudge another on their great hit, or nice play.  They were proud of them.  They were happy for their friends.  There was ZERO jealousy.  Some of these girls might not have even known each other before the season started.  But they found something they all had in common, softball, and they let it form a friendship among all of them.  They never shunned another one because she wasn't in their circle.  Everyone was included.  The more the merrier.

We had some great times at tournaments in between games, hanging out, playing, and telling stories.  Eating our sandwiches, and cooling off in the shade, bonds were formed, both among the girls, and among the parents.  Most of the parents, I already knew, but I got to know them more than just on the surface.  And we all got to do something very important to us all, which was cheer on our girls.

We also had some pretty somber moments.  One of the girls on the team lost her dad, very unexpectedly mid-season.  She missed a game because of it, and when she was gone, the girls weren't being nosy, asking what happened, they were just asking about their friend.  They just wanted to see her, and know that she was ok.  They just wanted to make her feel better.  They just wanted to support their friend, no questions asked.  They didn't want to know what was in it for them, they just wanted to make her feel better.  And when she came back, you better believe, those other nine girls were her biggest cheerleaders on that field and in that dugout, trying to get her mind off of everything else going on. When those 10 girls got the opportunity to step out on the field together, they got to shut out the rest of the world, and just play softball with nine of their best friends.

﻿
We went undefeated in league, and lost a few travel team games.  I can't take credit for this.  Our head coach did most of the work.  I was just support staff.  But these young ladies showed me so much about good sportsmanship.  They won with dignity, and lost with their heads held high.  Not once, did I ever hear them taunting the other team, or talking trash, that we too often hear with older kids in the sporting world.  There were never bats slammed down, or helmets thrown.  There was only high fives, and words of encouragement.  I was so proud of every single one of them.  Six out of the 10 girls will be moving up to the next age bracket next year, and they won't be on the same team as Breckyn.  So our team won't be together again next year.  I will have a new group of girls to work with next year.  I'm going to miss those girls so much next year, but I know they will do amazingly well at the next level.  And I'm not going to lie, I shed a tear or two after our last game.

Wouldn't it be nice if we, as grown women (and men) could get back to that?  If we could eliminate cliques, and social stigmas, how much nicer would this world be?  If we could go back to those innocent days, and for an hour and a half at night, we got to just hang out with friends, playing the sport we love, how lucky would we be?

To the parents of my girls, thank you so much for sharing your girls with me this summer.  Thank you for letting your girls remind me about so many of the good things in life.  Thank you for trusting me to help guide them in their growth in this sport that I love so much.  But most of all, thank you for making this experience a positive one for me.  To Jeff, thank you for giving me the chance to be your assistant coach.  You will never know how much that means to me.  You, and this group of girls, made my summer.  And for that, I will forever be grateful to you.  Will I coach again?  If I'm given the chance, absolutely.  And whether I have the same group of girls again or not, know that I will always be cheering this group of 10 girls on no matter what.  For they have taught me more that I ever could have taught them in one summer. 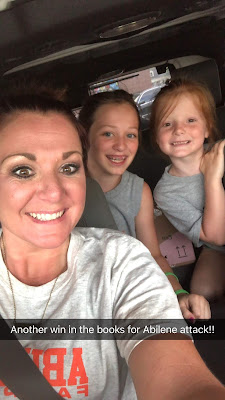