God sometimes has a very funny way of reminding us just how human we all are.

I got a phone call tonight that they say most parents dread, but in my case, it's the phone call every child dreads too.  My phone rang, it displayed "Momma Cell" so I answered in a goofy voice, expecting her to tell me that she made it home safely from visiting my grandparents in Topeka, and instead I am greeted with a man's voice asking if this is Cora.  My heart dropped to my stomach instantly, when he started telling me she had been in an accident on the highway.  All I could hear was chaos, and her screams in the background.  He told me she would be ok, and to meet them at Abilene hospital, which told me they were close to home.  I asked where it happened, and when he told me it was only 3 miles from Abilene, I told him I was on my way.  What I pulled up to is something I never expected.

My mom's driving is an ongoing joke with our family.  When my mom and sister took a road trip together back in November the joke was "They'll get there safe as long as Misty drives".  One time, I remember nearly crawling out of the window because she began swerving like crazy, and when I screamed and asked her what she was doing she yelled back "Well.... the line on the side of the road was all... crooked".  So we lovingly tease her about her driving "skills" on a next to daily basis.  However, she had never had a major incident.  Not like this one.

When I pulled on to the interstate all I saw were red and blue lights.  There were fire trucks, ambulances, state troopers, wreckers.  I just pulled up in to the middle and ran to what I assumed to be her van, and followed the sound of her cries.  I dropped to my knees, told her I was there, and looked up and thanked God that I was listening to the sound of her voice.  They had just put the fire out on her van.

Everything that transpired after that was kind of a blur.  Hearing my mom cry out in pain like that is not something I'm accustomed to.  She has always been the caretaker for me, and having the tables turned was not something I was prepared for.  They got her loaded, in the process of which it became very clear that her leg was severely broken.  Then they took her to Abilene via the ambulance.  After they pulled off, I walked over to her van, and saw two of my kids' booster seats laying in the middle of the highway.  And I said another prayer of thanks that my babies were safe at home.

From what we can deduct happened, a semi in front of her lost it's load of steel beams.  Mom said she saw the cab of the semi out of the corner of her eye to her left, and then she hit a beam head on at 75 MPH, rolled, and landed in the median, where her van caught fire.  From what I could see, it was basically unavoidable.  My mom had several guardian angels looking out for her last night.  A man, pulled her out of that van when it caught fire.  And after they got her out, a woman sat with her until the EMT's got there, and prayed with her.  For anyone who knows my mom, you know how strong her faith is.  This was exactly what she needed in that exact moment.  I hugged the woman, and she even cried with me, and now, I'm kicking myself for not getting her name.  But to the man that pulled my mom out, and to that woman who prayed with her, whoever you are, THANK YOU.  You were her guardian angels last night, and words can not express my gratitude.

She was transported to Salina Regional Medical Center where the surgeons looked at the x-rays and told her that the break was beyond anything they felt they could fix.  So around 1 AM this morning, they transferred her on to Wesley Medical Center in Wichita, KS where a team of surgeons is going to see if they can piece back together her shattered leg.  We don't know the extent of the damage, but right now they are saying that her right tibia is shattered, her right ankle is broken, her right foot is broken, and both her right and left heels are broken.  She went in for what they called "the first of multiple" surgeries this morning.  She will have a very long road ahead of her, but she is alive.  And I am so grateful for that.  My dad is going to have to brush up on his nursing skills!

Looking at her van in the daylight, she is a very lucky woman.  She had someone looking out for her.  A very important woman to me gave me a visor clip for my first car when I first started driving.  It was and angel and it said "Dear Lord, please protect me and all who I pass by, and remind me never to drive faster than my guardian angel can fly".  I am glad my mom's guardian angels were keeping up with her van last night.  They definitely worked some overtime.  Thank you everyone for all of the calls, texts, messages, and kind words.  Keep the prayers coming.  It sounds like she will need a lot of them. 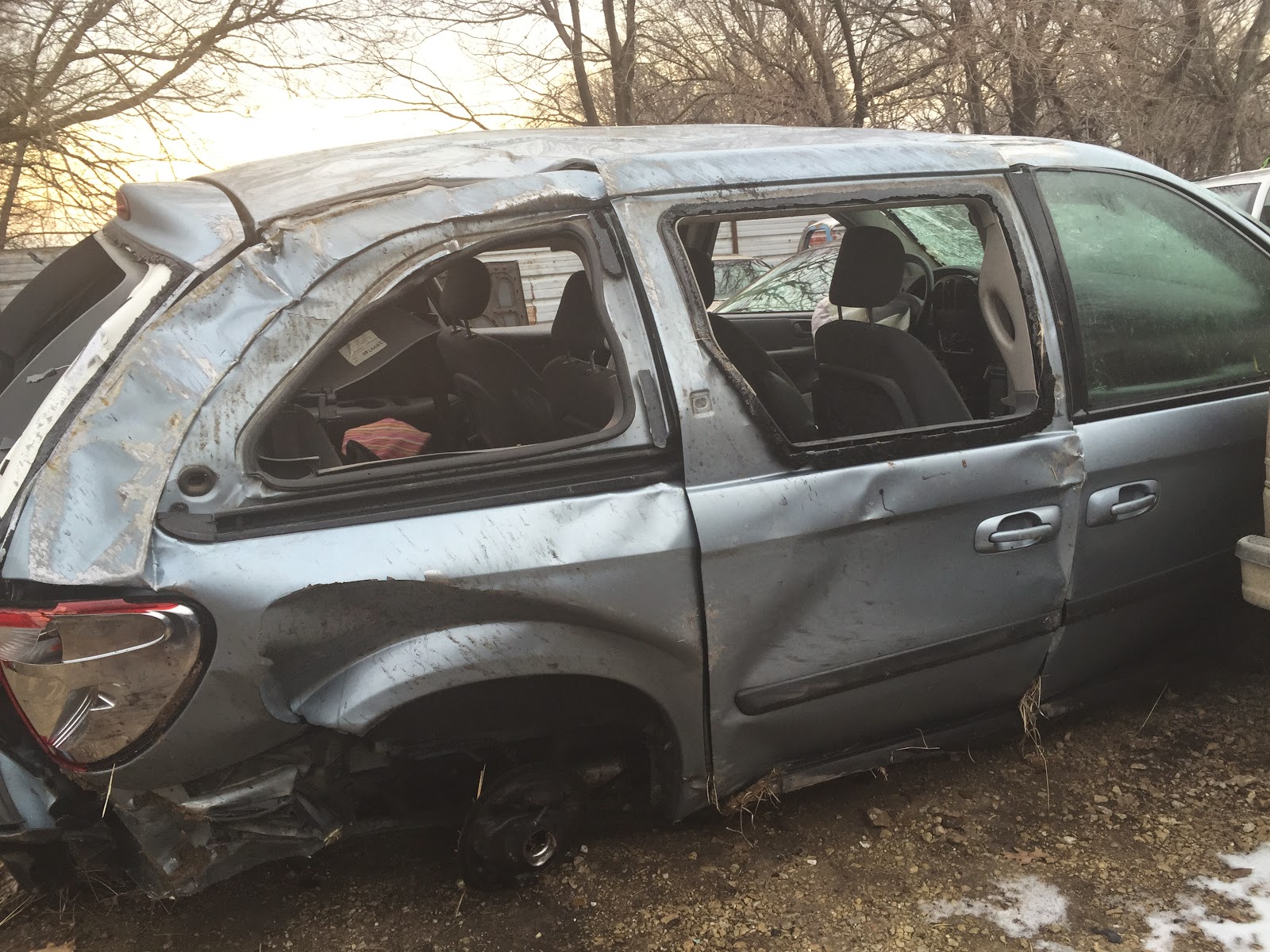 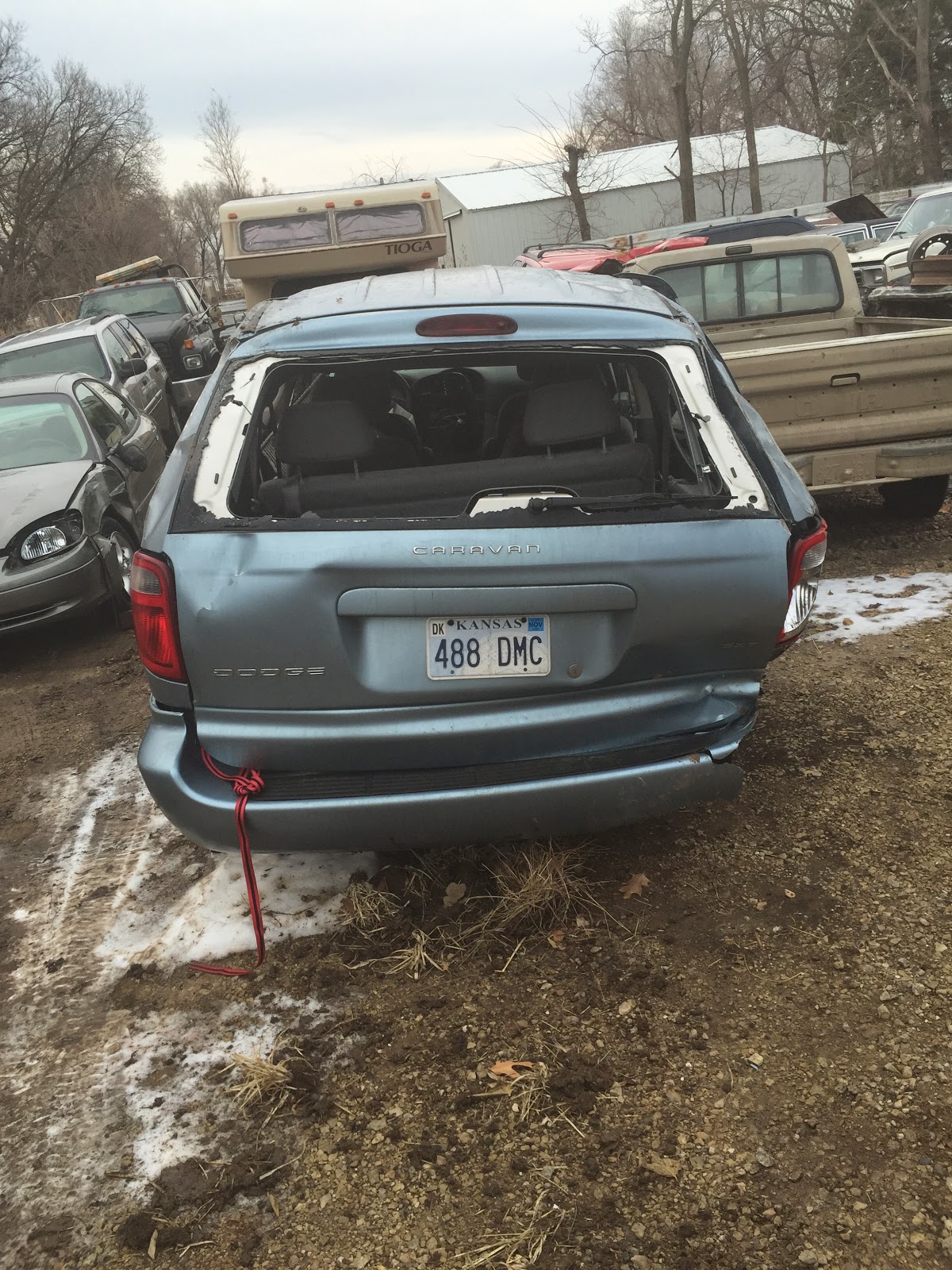